ATLANTA, March 30, 2017 /PRNewswire/ — Cinnabon® Bakery Manager Gene is back in Omaha, Nebraska for the third season of the hit AMC show, Better Call Saul. In the first episode of the new season, airing on Monday, April 10 at 10:00 p.m. ET/PT, Saul (Bob Odenkirk) will return as his present-day undercover persona, Gene. 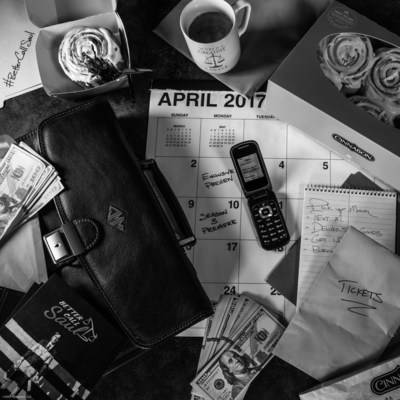 In celebration of the upcoming season three premiere, Cinnabon invites fans to reveal an exclusive sneak peek by visiting Cinnabon.com/BCSsweeps. By entering an email, Saul supporters will help unlock a secret, never-before-seen clip of the upcoming season and will be entered into the Cinnabon Better Call Saul Sweepstakes. Fans can also post on social media using the hashtags #BetterCallSaul and #Sweeps for additional chances to win Saul’s coveted briefcase, filled with an undisclosed amount of cash and some of his personal belongings. The sweepstakes takes place now through April 23 and the winner will be announced on April 24.

Welcoming Gene back to Cinnabon, participating bakeries across the country are hosting a BonBites™ giveaway to all fans who visit the bakery between 5-7 p.m. on April 10th, just before the season premiere airs.  Visit Gene’s place of work for a FREE four count sleeve of BonBites and snap a selfie with a life-sized standee of Jimmy McGill and share the photo on Facebook, Instagram, or Twitter with the hashtags #BetterCallSaul and #Sweeps for even more chances to win the briefcase!

«We are thrilled with the overwhelmingly positive response we have received as a result of our partnership with AMC.  The third season of Better Call Saul brings more complexity to the program, allowing greater opportunities to surprise and delight our fans,» said Jill Thomas, vice president of global marketing for Cinnabon.

About Cinnabon®
Founded in Seattle in 1985 and now based in Atlanta, Cinnabon LLC, a Georgia Limited Liability Company is the market leader among cinnamon roll bakeries. The company serves fresh, aromatic, oven-hot cinnamon rolls, as well as a variety of other baked goods and specialty beverages. Cinnabon® currently operates over 1,200 franchised locations worldwide, primarily in high traffic venues such as shopping malls, airports, train stations, travel plazas, entertainment centers and military establishments. Cinnabon® is also a multi-channel licensor, partnering with other companies to provide over 70 brand licensed products at foodservice and retail venues. Visit www.Cinnabon.com for more information, follow on Twitter @Cinnabon or become a Facebook fan at www.facebook.com/Cinnabon.

About AMC
AMC is home to some of the most popular and acclaimed programs on television. AMC was the first basic cable network to ever win the Emmy® Award for Outstanding Drama Series with «Mad Men» in 2008, which then went on to win the coveted award four years in a row, before «Breaking Bad» won it in 2013 and 2014. The network’s series «The Walking Dead» is the highest-rated series in cable history and the number one show on television among adults 18-49 for the last five years.  AMC’s other current original drama series include «Better Call Saul,» «Hell on Wheels,» «Turn: Washington’s Spies,» «Halt and Catch Fire,» «Humans,» «Fear the Walking Dead,» «Into the Badlands,» «The Night Manager,» «Preacher,» and the forthcoming «The Son,» «The Terror,» «Lodge 49,» «Loaded» and «McMafia.» AMC also explores authentic worlds and discussion with original shows like «Talking Dead,» «The Making of The Mob,» «Comic Book Men,» «Ride with Norman Reedus» and «The American West.» AMC is owned and operated by AMC Networks Inc. and its sister networks include IFC, SundanceTV, BBC America and WE tv. AMC is available across all platforms, including on-air, online, on demand and mobile.

To view the original version on PR Newswire, visit:http://www.prnewswire.com/news-releases/amc-and-cinnabon-team-up-for-the-third-season-of-better-call-saul-300432159.html