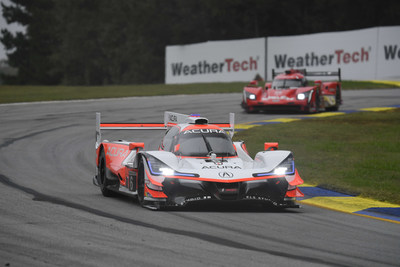 Acura Team Penske
Cameron took his #6 ARX-05 to the pole in a hard fought 15-minute session to set the field for Saturday’s 10-hour Petit Le Mans endurance contest, setting a new lap record to edge his teammate Ricky Taylor in the #7 Acura by 0.094 seconds.

The pole is the second of the season for Cameron, and the fourth consecutive WeatherTech SportsCar Championship pole for Acura Team Penske this season, a streak that started at Road America in August.

Taylor completed the front-row sweep for Acura, in the car he will share with Helio Castroneves and Alexander Rossi tomorrow, while Cameron’s co-drivers at Road Atlanta will be Juan Pablo Montoya and Simon Pagenaud as Acura Team Penske seeks a fourth consecutive victory tomorrow.

Meyer Shank Racing Acura NSX GT3
Shinya Michimi, third driver for Meyer Shank Racing in the long-distance rounds of the WeatherTech SportsCar Championship, claims his first career pole in the #86 Acura he shares with full-season drivers Mario Farnbacher and Matt McMurry.  Michimi battled for fastest lap honors throughout the 15-minute qualifying, eventually besting the Ferrari 488 GT3 of Jeff Westphal by 17 hundredths of a second to take the GTD pole.

Where to Watch
Live network television coverage from Michelin Raceway Road Atlanta begins at 12:30 p.m. Saturday, October 17, for six hours on the NBC Sports Network.  Coverage will resume on NBCSN from 9:30 p.m. EDT to the finish.  Live flag-to-flag race coverage also will be available on the NBC Sports App and NBCSN Gold with NBCSN Trackpass authentication.

Quote
Dane Cameron (#6 Acura Team Penske ARX-05) pole qualifier, new lap record; Cameron’s second consecutive pole this season and 14th career IMSA pole; the fourth consecutive pole of 2020 for Acura Team Penske: «When we were here in September [for the six-hour race], I thought we missed the [qualifying] setup a little bit, so we made a few changes to get the car a bit more on the limit.  I took a lot of risks on that [pole qualifying] lap, so we’re really, really happy with the result.»

Shinya Michimi (#86 Meyer Shank Racing Acura NSX GT3 Evo) pole qualifier, first IMSA pole, 12th pole for Meyer Shank Racing, new GTD lap record for Michelin Raceway Road Atlanta: «I haven’t had too many IMSA starts, but I’ve been with the right team this year – Meyer Shank Racing did an awesome job to give me a fast car today.  Our Acura NSX GT3 has been amazing and everyone at HPD has been amazing. It feels great to get pole and we’re building on our success from last month’s win here. But today was just 5% of the work, we have the whole 10-hours tomorrow. We’re definitely going to go and try to get the win.»