SAINT LOUIS, March 27, 2018 /PRNewswire/ — The Candidates Tournament held in Berlin, Germany, has come to a conclusion and, at the end of a grueling 18 days of chess, American Grandmaster Fabiano Caruana has emerged victorious and will be the next Challenger for the World Championship title. 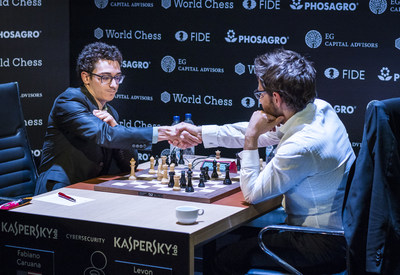 The Candidates brought together the best players in the world to determine the next Challenger, and it was an incredibly tight race. With two rounds left, the doors were still open for five of the eight players to come out on top. A crucial victory by Caruana against Armenia’s Levon Aronian in the penultimate round put him half a point ahead of his closest rivals – he even increased his lead in the final round with a victory with the black pieces against Russia’s Alexander Grischuk.

This is a historic result for American chess. The last player to participate in a unified World Championship match was Bobby Fischer in 1972 in his triumph against Boris Spassky. Caruana’s match against the reigning World Champion, Carlsen, has been scheduled by FIDE, the World Chess Federation, to be held in London from November 9-28 later this year.  Carlsen took the title from India’s Viswanathan Anand in 2013 and has since defended it twice: once against Anand in 2014 and again against Russia’s Sergey Karjakin in 2016.

«It is a great honor to represent my home country,» said Caruana.  «The Candidates Tournament win is the culmination of months of hard work, and I’m elated – simply without words. I look forward to going back to Saint Louis to prepare for dethroning Magnus.»

Born in Miami, Florida, Caruana relocated several times and ultimately made Saint Louis his home in 2015 due to the surge of chess in the city. Caruana is now the best chess player in the U.S. and will lead the Americans as the first board at the 43rd Chess Olympiad in Batumi, Georgia, shortly before his World Championship showdown with Carlsen. In 2016, with the help of Caruana’s leadership, the Americans won gold for the first time at the Chess Olympiad since 1976.

«This is one of the most significant and historical achievements for American chess in years,» said Rex Sinquefield, founder of the Saint Louis Chess Club. «To have an American play for the World Championship will help elevate chess to levels it has not seen since the early 1970s.»

The final standings were:

The Saint Louis Chess Club is a non-profit, 501(c)(3) organization that is committed to making chess an important part of our community. In addition to providing a forum for the community to play tournaments and casual games, the club also offers chess improvement classes, beginner lessons and special lectures.

Recognizing the cognitive and behavioral benefits of chess, the Saint Louis Chess Club is committed to supporting those chess programs that already exist in area schools while encouraging the development of new in-school and after-school programs. For more information, visit www.saintlouischessclub.org.