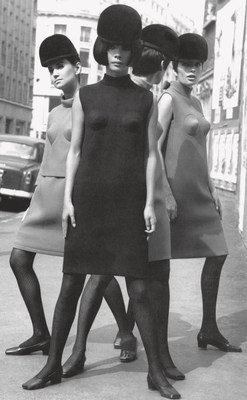 Best known for his 1960s space-age style featuring tunics, helmets, geometric shapes and vinyl, Cardin has pushed the boundaries of fashion for seven decades by exploring new materials and silhouettes. The exhibition presents more than 70 iconic looks for both women and men from the 1950s to present and includes several pieces from the SCAD permanent collection. Describing his principal philosophy, Cardin explained, «The clothes I prefer are the garments I invent for a lifestyle that does not yet exist — the world of tomorrow.» The exhibition celebrates Cardin’s spirit and vision, both unwaveringly inspired by the future.

«Pierre Cardin has always been a futurist, and innovative thinking has served as the cornerstone of his immense career success. What better way to celebrate his legacy as a pioneer of design and business practice-in fashion, global commerce, art, architecture, advertising, entertainment-than a newly curated exhibition of his work at SCAD, the world’s preeminent university for creative professions?» said SCAD president and founder Paula Wallace. «Come to SCAD FASH to see what Pierre saw. Come celebrate the man, the creator, the legend. Come step into the future he saw for us all.»

In addition to fashion, Cardin’s avant-garde style and innovation extends to accessories, costume design, jewelry, product design, fragrances, furniture, theatrical production and more. As the first haute couture designer credited with democratizing fashion, Cardin broke from tradition in 1959 by debuting a women’s ready-to-wear collection inspired by his couture designs, presenting luxury to the masses. This move revolutionized the fashion industry and made his designs accessible to a clientele with a contemporary lifestyle.

The exhibition is open to the public with the cost of museum admission. Admission is free for all museum members, as well as SCAD students, faculty and staff with a valid SCAD Card. For more information on the exhibition, visit scadfash.org.

About Pierre Cardin
A revolutionary force in the fashion world, the indomitable 95-year-old Italian-born French designer continues at the helm of his creative enterprises. Before launching his eponymous label, Cardin worked with Parisian fashion house Paquin where he helped design costumes for Jean Cocteau’s film Beauty and the Beast. Following his time with Paquin, Cardin worked with fashion houses Schiaparelli and Christian Dior. In 1950 he opened a shop of his own and later became known for licensing his name for use on a variety of products including fragrances, beauty products and sunglasses. The practice of licensing subsequently became common for fashion designers.

Cardin has earned countless accolades for his contributions to fashion and humanitarian causes. In 2008, Cardin was honored with the SCAD Étoile for his contributions to the fields of fashion and design as well as his role in the historic restoration and cultural life of the medieval village of Lacoste, the site of the university’s location in France.

Acknowledging his place in the upper echelons of French fashion, he has received the prestigious «Golden Thimble» award three times, which honors the most creative collections of Haute Couture (1977, 1979, 1982) and was recognized with the Council of Fashion Designer of America (CFDA) International Award in 2007. Cardin is also a member of the Académie des Beaux-Arts, part of the illustrious Institut de France. In addition to receiving numerous honors, Cardin was designated UNESCO Goodwill Ambassador and is decorated as a Commander of the Legion of Honor, the highest order of merit given by the president of France for military and civil distinction. Cardin has been the subject of several major international exhibitions including the Metropolitan Museum of Art, New York and Victoria & Albert Museum, London, and his garments are in important permanent museum collections worldwide.

About the SCAD FASH Museum of Fashion + Film
SCAD FASH Museum of Fashion + Film celebrates fashion as a universal language, garments as important conduits of identity, and film as an immersive and memorable medium. Situated within the SCAD Atlanta campus SCAD FASH focuses on the future of fashion design, connecting conceptual to historical principles of dress — whether ceremonial, celebratory or informal — and welcomes visitors of all ages to engage with dynamic exhibitions, captivating films and educationally enriching events.

Like the award-winning SCAD Museum of Art, SCAD FASH serves as a creative resource for students of all ages and a wellspring of inspiration for visitors. Through programming that engages the university’s broad array of academic disciplines, SCAD FASH offers diverse exhibitions, films, installations, performances and events to enliven and inspire the greater community year-round. Each program is designed to engage and appeal to visitors with varied backgrounds and interests, from textiles and jewelry to photography and film. Past feature exhibitions include the work of designers Oscar de la Renta, Daniel Lismore, Carolina Herrera and Guo Pei. Photographic exhibitions include the work of Jonathan Becker, Bill Cunningham and Omar Victor Diop. Exhibitions are accompanied by curated film series designed to complement programming; past films include «Ovation for Oscar,» «The First Monday in May,» «The Leopard» and «Funny Face,» among others.

SCAD: The University for Creative Careers
The Savannah College of Art and Design is a private, nonprofit, accredited institution conferring bachelor’s and master’s degrees at distinctive locations and online to prepare talented students for professional careers. SCAD offers degrees in more than 40 majors, as well as minors in more than 75 disciplines across its locations in Savannah and Atlanta, Georgia; in Hong Kong; in Lacoste, France; and online through SCAD eLearning. With more than 37,000 alumni worldwide, SCAD demonstrates an exceptional education and unparalleled career preparation. The diverse student body, consisting of nearly 14,000, comes from across the U.S. and more than 100 countries worldwide. Each student is nurtured and motivated by a faculty of nearly 700 professors with extraordinary academic credentials and valuable professional experience.

In 2017, the prestigious Red Dot Design Rankings placed SCAD as the top university in the United States and in the top two universities in the Americas and Europe. Career preparation is woven into every fiber of the university, resulting in a superior alumni placement rate. In a study of Spring 2016 SCAD graduates, 98 percent were employed, pursuing further education, or both within 10 months of graduation. For more information, visit the official SCAD blog.